Following up from the first review of the Etihad B787 First Suite , I will now review the First Class dining concept on Etihad Airways.  The route was Tokyo Narita to Abu Dhabi and Abu Dhabi to Tokyo Narita.  Both flights were in December 2016.

Etihad employs an onboard chef on their first class flights.  The chef will introduce him or herself to you rather like the cabin manager would normally do so on other flights I have taken.  On both flights the chef politely handed out the menus and explained the Dine Anytime concept.  The chef then confirms that they will return to take drink and food orders.  On both flights the chef was keen to explain the menu options, wine pairings and also suggested that if I do not see anything appetizing on the menu, he would happily conjure up something else using the ingredients listed on the menu.  As a first impression the chef appeared knowledgeable and genuinely interested in making the flight an enjoyable one from a culinary point of view.  As there are no set meal times, I had read online that you need to tell the chef if you want to have breakfast before landing. On both flights while clearing away the bedding after I awoke I was proactively offered breakfast by the crew.

At the beginning of the flight as with all other first and business class fights I have taken, I was offered a pre-departure beverage.  Unlike other flights I have taken, the available drinks were unrestricted, as in you could order anything you wanted.  I ordered champagne, again unlike other airlines, the champaign delivered was the signature champagne (Billecart-Salmon) on the beverage menu.  I have experienced other airlines who reserve the signature champagne for post departure and serve something cheaper on the ground.  As a first impression, Etihad won this round for me.  The pre-departure beverage is served on a silver tray with oshiburi  (hot towel) and a nice welcome note which was hand signed by the cabin manager.  There are also some dates, which are the welcome fruit of the middle east.  Always served in odd numbers for luck, in this case Etihad gave me three!  As for the welcome letter I think this is a really nice gesture that could be further improved by being signed by the crew who are looking after you, to be honest I saw the cabin manager twice during the flight – on boarding, to offer a personal welcome and then on de-boarding.  I would rather have had the names of the Chef and other crew members so that If I wanted to pass on compliments to the Customer Service Department, I be able to easily identify the crew members who I want to compliment. Just a thought!

As mentioned above, the onboard chef, complete with chef like uniform, delivered both the beverage and dining menu to me, at around the same time by pre-departure drink was delivered.  On other first class flights I have taken, the menu was handed over in a leather binder and handed to me (Qatar Airways & Thai Airways).  On Etihad both the beverage and food menus are handed over as they are by the onboard chef. They do look rather stylish and included English, Japanese and Arabic.

The beverage menu has a wide range of options available, both alcoholic and non alcoholic.  I was relatively pleased with the choices available.  The menu was logically laid out.  I am no connoisseur of fine wines and go with tastes I like, however the wine list was limited and had a distinctly Business Class feel.  The signature champagne retails for about $60.  Considering the amount of money people can pay for these flights, not such a premium list. When traveling long haul, I do make a point of trying the wine list.  I do enjoy a range of wines regularly and despite the lack of a premium feel to the wine list, there were some good tasting wines available which I will explain more about later.  The beverage menu was the same on both flights.

The food menu was also quite extensive.  There is no caviar service, so if that is what you are expecting, you will be disappointed.  As per the chef and his explanation, you are free to mix and match what ever you like and tailor your dining experience.  While Etihad gets a thumbs down for the lack of a caviar service, they do get a thumbs up for the flexibility of the menu.  It is better than being in a restaurant in some respects, because I can imagine the looks you would get if you started to mix and match the menu in a restaurant!  The chef was professional, offered recommendations, wine pairings and at no point did I feel pressured to follow the advise of the chef or that my attempts to mix and match were being restricted.  Again a thumbs up for Etihad!

I ordered as I pleased and was proactively offered water with each course and wine pairings which I was happy to explore, I was also asked for my post take off drink of choice.

Of course I ordered champagne, again served on a silver tray with some other little items for me to enjoy (cashew nuts, olives and Japanese rice crackers) while my meal is prepared.  I especially enjoyed the olives. Regular top ups were offered.  This tray was brought to my suite about 20 minutes after take off so I did not have to wait long.

I will spilt this section into two sections  – Outbound (NRT – AUD) and Inbound (AUD – NRT) ass all other aspects were the same on both flights, only the menu options differed slightly.

The table setting was rather good and Etihad have special Nikko branded tableware that looked rather stylish.

I skipped dessert and went straight to the cheese plate.

Etihad deserves special mention here for their stemware, which was perfect, proper sized classes and correct class types for the different types of wine.  Call me picky, but I hate being served a thimble of wine and having to chase down the crew for top ups! The stemware did not appear to be specifically branded, other than with Etihad.  They had a good feel to them and I am sure made the wine taste better adding to the luxurious feel of the first dining experience.  The main course was good, the others average, the thing I liked most was that you could tell that the meal had been freshly prepared and tasted the better for it.

As I was completely stuffed and ready for bed I asked for a final nightcap.

After an excellent sleep I woke up to be offered breakfast.

The breakfast was good, it is always nice to have eggs sunny side up on an aircraft.  I could not eat another bite on this flight.  Orange and Passionfruit juice was served with breakfast and it was an excellent pick-me-up, I had two classes to get me started for a busy day.

All in all a good meal service, the tailoring was great and it felt like I had my own personal Chef, the best parts were the main course, the steak sandwich and the breakfast.  Extra marks for the fine table and stemware, so 7/10.

The welcome drink service, table settings and post take off beverage service were exactly the same as on the outbound flight so I will get straight into the meal service. 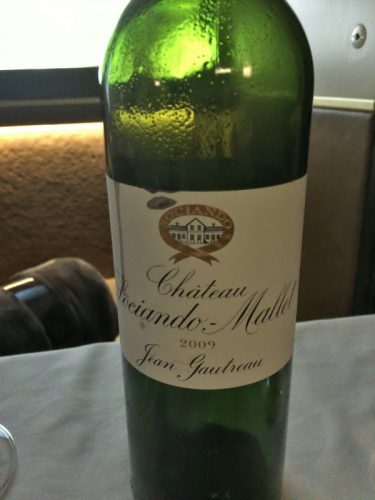 Again suitably stuffed and off to bed.  Have to say that this meal was better than the inbound flight, I guess departing from Etihads home base it should be better?

The inbound flight is about 2 hours shorter so again after a great sleep I awoke to be proactively offered breakfast as detailed below.

Again the breakfast was served with a rather special juice of beetroot, kale and apple which was also excellent.

Again another good meal service from Etihad and I would give this one an 8/10 as the steak and soup were excellent.

A note on the onboard service

On the outbound flight the crew were very proactive in offering refills, when they say your class was nearing empty they proactively offered more without prompting.  it should be noted that the cabin was half full on the outbound (4 out of 8).  The outbound flight was also nearly 12 hours in duration.  The inbound flight, while not rushed was not as proactive.  The cabin was full and the flight was shorter by 2 hours so this could explain the lack of proactivity on the part of the crew.  There was a feel of inconsistency to both flights.  The crew, while professional lacked the polish that I have come to expect from other airlines that I fly with regularly (Japan Airlines, Singapore Airlines) and seemed to lack in general experience.  Perhaps this is just my experience on these two flights.  Some reviews of Singapore Airlines state that the service is robotic, however I do prefer to know exactly what I am getting while on board.  Etihad provided decent service, just not as polished as some of the others I have used.

In summary the food was decent, I was not wowed by the food itself (except by the steak and soup on the inbound flight) but was very impressed with the tableware and stemware.  You can tell there has been a bit of cost cutting compared to other First food options that had previously been available.  Despite this I was still satisfied with the quality and quantity.  I think that the food tailoring is also a winner.  Some aspects were better than expected, such as the serving of signature champagne as the welcome drink, the post take off drink tray and the grill menu, some aspects were not as good as I expected, however overall Etihad did a good job and I arrived both times well fed and rested, just what you expect after coming off a long flight.